That's a nice poster. Although I think I might have seen similar posters in the past.

Fox Deletes Scene From ‘The Predator’ With Registered Sex Offender 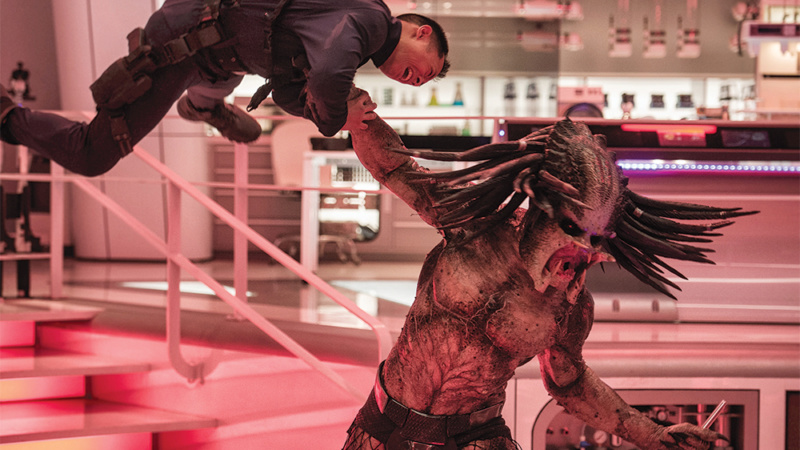 Twentieth Century Fox has deleted a scene from Shane Black’s “The Predator” after discovering it featured a registered sex offender.
Black issued an apology Thursday afternoon for casting Steven Wilder Striegel in a scene opposite Olivia Munn: “Having read this morning’s news reports, it has sadly become clear to me that I was misled by a friend I really wanted to believe was telling me the truth when he described the circumstances of his conviction. I believe strongly in giving people second chances – but sometimes you discover that chance is not as warranted as you may have hoped.”

“After learning more about the affidavit, transcripts and additional details surrounding Steve Striegel’s sentence, I am deeply disappointed in myself. I apologize to all of those, past and present, I’ve let down by having Steve around them without giving them a voice in the decision,” Black added.

The scene featured Steven Wilder Striegel’s character hitting on Olivia Munn’s character. Fox removed the scene after Munn told the studio on Aug. 15 about Striegel being a registered sex offender. Striegel pleaded guilty in 2010 to two felonies — risk of injury to a child and enticing a minor by computer — after facing allegations that he attempted to lure a 14-year-old female into a sexual relationship through the internet. He served six months in jail.

“Our studio was not aware of Mr. Striegel’s background when he was hired,” a Fox spokesperson said in a statement on Thursday to Variety. “Several weeks ago, when the studio learned the details, his one scene in the film was removed within 24 hours. We were not aware of his background during the casting process due to legal limitations that impede studios from running background checks on actors.”

Striegel told the Los Angeles Times that he did not have to audition for his part in the movie. “The character I played was named after a mutual friend of ours, and it seemed a good fit,” he said.

Striegel was cast previously cast in Black’s 2013 film, “Iron Man 3” and in 2016’s “The Nice Guys.” Black defended his decision to cast Striegel in “The Predator,” telling the L.A. Times, “I personally chose to help a friend. I can understand others might disapprove, as his conviction was on a sensitive charge and not to be taken lightly.”

Munn told the newspaper that she found it “both surprising and unsettling” that Black did not share this information to the cast, crew, or Fox Studios prior to, during, or after production. She also said, “However, I am relieved that when Fox finally did receive the information, the studio took appropriate action by deleting the scene featuring Wilder prior to release of the film.”

Striegel also released a statement to the Times. “I’ve known Shane Black 14 years, well before this incident, and I think it’s worth noting that he was aware of the facts. Shane can speak for himself, but I’m quite certain that if he felt I was a danger in any way to have around, he would not have.”

“The Predator” premieres Thursday night at the Toronto International Film Festival before opening in theaters nationwide Sept. 14. Early tracking has shown is will open in the $25 million to $30 million range. Black’s new installment of the “Predator” franchise follows the titular aliens, who return to Earth, now deadlier than ever before after taking the DNA of other species. Jacob Tremblay’s character accidentally triggers an alert that brings the Predators back to Earth.

After seeing the latest trailer, my theory of an impersonating Predator is out the window. lol I've just never seen a Predator that big going against a small one.

@UltimateMarvel wrote:I've just never seen a Predator that big going against a small one.

Are you talking about Steven Wilder Striegel?

20th Century Fox's release of The Predator may have topped the weekend box office, but whether it was the controversy swirling around the film, dwindling franchise interest or a combination of both, the film delivered the lowest opening weekend gross for a live-action film debuting in over 4,000 theaters. Meanwhile, Lionsgate's A Simple Favor delivered solid numbers in a third place finish, Studio 8's White Boy Rick debuted with moderate results and Pure Flix's Unbroken: Path to Redemption debuted on the lower end of expectations.

With an estimated $24 million, 20th Century Fox's The Predator took the weekend's #1 spot, but the film has little to celebrate. Debuting in 4,037 theaters, the film's opening is the worst for a live-action film opening in over 4,000 locations, unseating The Mummy, which previously held the distinction after its $31.6 million opening in 4,035 theaters last summer. The opening currently falls short of even 2010's Predators which opened with $24.76 million in just 2,669 locations. That film went on to gross just over $52 million.

The Predator received a disappointing "C+" CinemaScore from opening day audiences. Weekend crowds were 62% male with 66% of the audience coming in 25 years of age or older. These are the exact same demos Alien: Covenant saw last year, and should The Predator deliver a similar 2.05x multiplier we're looking at a domestic run just shy of $50 million.

Internationally, The Predator debuted in 72 markets with an estimated $30.7 million. Leading the way was Russia with an estimated $4.7 million followed by the UK ($3.1m), Thailand ($1.1m) and Hong Kong ($948k). Next weekend, the film opens in 11 additional markets including Argentina (Sep 20) and Mexico (Sep 21) followed by October releases in Belgium, France and Italy.

No, I'm talking about in the trailer.

lol I thought you were serious. You always gotta put the

Tyger otherwise it's considered a serious post. So, technically, you ruined your own joke.

THE PREDATOR’s Original Ending Was Much, Much Different 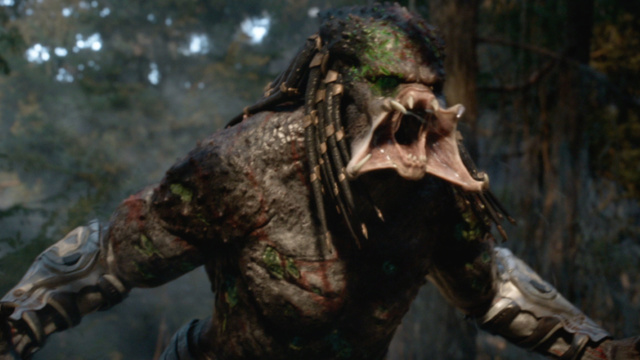 Final Warning: This post contains spoilers for The Predator.

No, Seriously: Do not read this until you've seen The Predator.

The messiness of that third act was probably my biggest quibble with the film. There's too much choppy editing, too much wonky CGI (particularly in the sequence wherein Boyd Holbrook's Quinn McKenna fights his way onto an airborne Predator ship), too much wheel-spinning, and the film's final scene feels tacked-on and underwhelming. This goes double if you've read Shane Black and Fred Dekker's The Predator screenplay, which features an entirely different (and way more exciting!) final beat.

In the film, the very last scene finds Quinn McKenna (Boyd Holbrook) learning that a rogue Predator has gifted humanity with a "Predator killer", which turns out to be a suit of Iron Man-esque super-armor (remember that overly-busy Shredder design from 2014's Teenage Mutant Ninja Turtles? Well, it's like that, only it's also a Predator). Obviously, the intention here was to set up a sequel, one wherein McKenna would use this eyesore of an exoskeleton to protect the world against a new wave of Predator attacks. Eh, well, alright!

In Dekker and Black's original screenplay, however, this scene isn't there. Instead, McKenna, his son, Rory (Jacob Tremblay) and Casey Bracket (Olivia Munn) have all just survived the final attack of the Super Predator (referred to as "The Upgrade" in the script) when a helicopter lands. Out climbs...Dutch Schaeffer (Arnold Schwarzenegger), his "face haunted; etched by pain." Dutch tells the trio to come with him, and when Rory asks, "Uh...me, too?", the franchise's second-most iconic badass smiles and says "Especially you."

It's easy to imagine fans going absolutely apeshit upon the Dutch reveal. The thought of Schwarzenegger returning for a sequel - which was clearly what this scene was setting up - would've sent them out of the theater dying to see what would happen next. It's a great ending, undeniably better than the one we got, so...what happened?

Well, a look at ye olde BMD archives makes answering that question very easy: back in April of last year, we learned that Schwarzenegger was approached about appearing in the film, read the script, didn't like it, and opted not to do it. Here's exactly what he said at the time:

"They asked me, and I read it, and I didn’t like it — whatever they offered. So I’m not going to do that, no. Except if there’s a chance that they rewrite it, or make it a more significant role. But the way it is now, no, I won’t do that."

Whatever other misgivings Schwarzenegger had about Dekker and Black's script are unknown, but mentioning he'd be interested in a "more significant role" kinda spells out the issue here, don't you think? The Austrian Oak wanted a bigger role, not a cameo, and presumably didn't have the patience or inclination to wait for the next Predator movie to make that happen. Kind of a bummer, to be sure, but let's be frank: Schwarzenegger ain't getting any younger. One can imagine him wanting to get the job done sooner rather than later.

I forgot to mention that I watched this a couple off weeks ago. Not as good as the Adrien Brody one, this one was much more lighter and comedic but I did laugh in almost all of Thomas Jane's scenes. lol

I got the 4 movie 4K set so I finally watched this. It was better than expected, but I had low expectations.

I really thought it was gonna be Dutch in that pod the whole time. Final reveal was a letdown.

@Tyger wrote:I got the 4 movie 4K set so I finally watched this. It was better than expected, but I had low expectations.

I really thought it was gonna be Dutch in that pod the whole time. Final reveal was a letdown.

Arnie keeps refusing to appear no matter how many times Black writes a great return for Dutch, he will always choose another movie over returning to this franchise just like he's been doing since Predator 2. Arnie is a cunt and he keeps ruining it for everybody else.
_________________
TV Shows I'm Streaming: [b][size=16]Rick and Morty, Homeland,   [/size][/b]
In My Hulu Queue: Once Upon a Time in Hollywood, Bloodline, Big Time Adolescence, Fast Times at Ridgemont High, Career Opportunities, Risky Business, Clay Pigeons, Wild Things, A River Runs Through It, Last Action Hero, Donnie Brasco, Addams Family, Addams Family Values,